On Friday, 7 September 2012 the United States Black Cavalry Family (USBCF) and friends from the NJ Buffalo Soldiers and the Blue Knights participated in the honorable burial of six (6) veterans who served during World War II and the Korean War. When these veterans died their remains were never claimed and so they were cremated and placed on funeral home selves throughout the state of New Jersey, never receiving the proper burial that should be accorded all American veterans.


A wonderful organization here in New Jersey has made it their mission to locate, identify and inter orphaned and abandoned cremains of American Veterans from all over New Jersey and provide a proper and honorable burial at a New Jersey State Veterans Memorial Cemetery. These interments are with full Military Honors, a Mahogany Urn, Bronze Military Emblem, and a US Flag. The name of this organization is THE NEW JERSEY'S MISSION OF HONOR FOR CREMAINS OF AMERICAN VETERANS. It is led by its Co-Founder, and Chairman, Mr. Francis Carrasco, a man totally dedicated to the organization's mission.. Today we had the honor of assisting them in there mission. We met at the American Legion, Brick Memorial Post 348, Brick, NJ. The initial ceremony was hosted by the Brick Memorial Post and held on their beautiful grounds. Dignitary Albert Bucchi, Director NJ Department of Military and Veteran Affairs and American Legion Dignitaries, including State Commander, Gene O'Grady, Legion Riders and bikers from across the state were in attendance to honor the six deceased Veterans and to finally escort them to their final resting place of honor, The Brigadier General William C. Doyle Veterans' Memorial Cemetery, in Wrightstown, NJ.

Today was the 15th Mission of Honor Tribute to Forgotten Veterans. We were proud to be a part of it and hope to further support their mission in the future.

Those honorably interred today were:

A Presentation to the Residents at The Juvenile Justice Commission - March 2, 2012 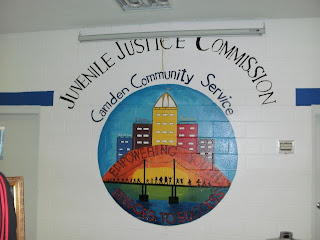 Although Black History Month may have ended, members of the United States Black Cavalry Family (USBCF) continue to educate young men and women in their communities and those confined in special programs. Yesterday “TC”, “Sunny”, and “Big T” traveled to Camden, New Jersey to address young men assigned to the Camden Residential Community Home and Transitional Program. This program is under the New Jersey Juvenile Justice Commission (JJC).

The Juvenile Justice Commission is committed to providing a continuum of care that prepares juveniles to return to their communities at the completion of their sentences. Transitional programs provide an integral step that helps juveniles succeed upon their release.

The USBCF was invited to address 20 of these young men by the program’s superintendent, Mr. Furqan Sharif and Rev. Jonathan Cook. It was another afternoon well spent by members of the USBCF fulfilling their mission of assisting those in need.
Posted by USBCF at 6:45 PM No comments: 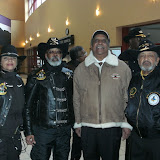 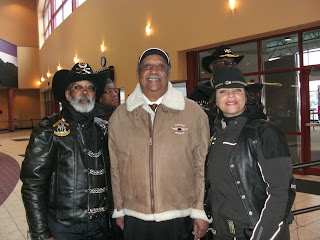 Early last week Jan and I contacted Dr. Hayling's wife to determine if Dr. Hayling would like to be escorted to the showing of the movie "Red Tails". Without hesitation and with a lot of enthusiasm Dr. Hayling agreed. We set the date for the 4:15 showing today. We decided that we would pick them up at 3:30. Plans were made to have a motorcycle escort made up of riders from the United States Black Cavalry Family and members of the NJ Buffalo Soldiers Mother Chapter. The recent freezing temperatures, snow and black ice were not parts of the plan and Dr. Hayling and his lovely wife were concerned that if it did snow we would not be able to make the scheduled escort that he was so looking forward to.

I contacted "BrotherWolf" and "Bemoe", President and VP of the NJ Buffalo Soldiers, my best friend Herb "King Wing" Dorsey and my presentation partner "Big T". All agreed that they would support us regardless of the weather. My challenge now was to convince Jan, who is from California, that she could ride in extreme cold weather, and ride safely around patches of snow and black ice. She finally agreed because she didn't want to disappoint the Haylings or break our promise to them.

It was below 30 degrees this morning and I received two calls from friends who couldn't get their bikes out of their garages because of the ice and snow. But they all agreed to drive their cars. I got up at 7am, rode the course to insure that it was negotiable, made changes were necessary because some Trenton streets had not been cleared and was back home by 10am. Jan and I cleared our driveway, got the bikes out and were ready to ride when "Big T" pulled up in his Lincoln SUV. We rolled slowly to our meeting spot about 15 miles away. Our first thought was to get some coffee to warm up but as we reached the parking lot to our surprise Herb, Rob, "Big Mitch", "Thor", "Special K", "BrotherWolf", "Bemoe" and "Batman" were already there waiting. The Haylings would have there escort after all, maybe not all on motorcycles but an escort nonetheless.

We arrived at the Hayling home on time and before we could shut down the engines and get a camera out, Dr. Hayling was coming out the house and down the steps. He was really anxious to see the bikes and to have his first experience with bikers. We all greeted him and his son Leslie Jr. and "Big T" and Herb got them settled in the Lincoln. We kissed his wife good bye as she waited and watched from the steps above then started our duty of escorting a hero to a showing of a movie depicting a part of his life. As we arrived some patrons were coming out of the theater. I asked them if they had just viewed the movie "Red Tails". When they said yes I explained to them that one of the original Tuskegee Airmen was sitting in the SUV and if they were willing to wait a few minutes they could meet him. Before long the crowd grew and everyone wanted a picture. Jan went inside and worked with the theater staff to get preferential seating for our group. Once everything was ready, the Black Cavalry and the Buffalo Soldiers lined the entrance way to the theater and saluted as Dr. Hayling walked through us and into the theater. We all thoroughly enjoyed the movie and I enjoyed seeing the proud expressions on Dr. Hayling's face as he watched. As the credits rolled at the end I stood and announced to the audience that they had just shared a viewing of the movie with an original Tuskegee Airman, then introduced Dr. Hayling. Everyone cheered and applauded and reached out to touch him or to shake his hand. It was a wonderful experience for all in attendance.

Dr. Hayling and his son as well as the Cavalry and the Soldiers were swamped in the lobby with questions and request for pictures. We finally left the theater about an hour after the movie ended. Only 5 of us remained to escort Dr. Hayling back to his home. Jan, Rob and I each on our bikes and Herb and Big T in the Lincoln with Dr. Hayling and his son. The temperature had dropped, the roads and streets were less than desirable, it was dark and we had 35 miles to go before we were home.

When we reached Dr. Hayling home he and his son really expressed how grateful they were and they presented us with copies of a speech made by another Tuskegee Airman, COL. George S. "Spanky" Roberts, United States Air Force, (Retired) during a Black History Presentation at the Smithsonian Institute, in Washington, DC on 25 February 1983. The speech gives an excellent review of how the Tuskegee Airmen were formed and operated.

Jan and I wish to thank all who participated and a special thanks to Dr. Hayling and his family for allowing us to honor them.

USBCF
The mission of the United States Black Cavalry Family (USBCF) is to partner with local communities to provide hands on voluntary assistance to organizations supporting the needs of veterans and the welfare of families existing in or near poverty. Additionally, our mission is to educate impoverished families to enhance their emotional, social, and spiritual well being.