A SALUTE TO AN EXCEPTIONAL ORGANIZATION

I am honored to render this salute to a very special organization,

The Missing In America Project. 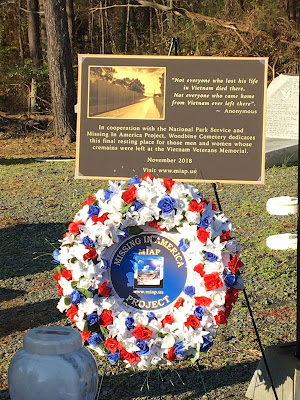 I took off from work on Friday and headed toward Washington, DC to attend a special meeting. No I’m no big government official or lobbyist or anything of that kind. I’m just an old military retiree who had been asked to lend a helping hand. You see about six months ago I received a call from a friend of mine in California. His name is Fred Salanti and he happens to be the National Executive Director & President of the Missing In America Project (M.I.A.P.). 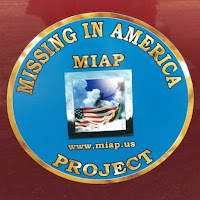 We had worked together in the past on several occasions and he wanted to just give me a heads up on a mission that they may be undertaking in the DC area. Fred has a way of asking you to do things… without really asking. So before I knew what was to happen, he had already convinced me to be ready to participate.   Fred explained to me that Brigitte Corbin, M.I.A.P. Region 8 Coordinator, and her team in the Virginia area would be overseeing the entire mission and that she would contact me when details were completed. The United States Black Cavalry Family (USBCF) had worked with Brigitte and her team in the past at both Arlington and Quantico. We knew immediately that things would be handled professionally. So I stood by for weeks and simply waited for her call…..and her call did come.

Closing in on our Nation’s Capital the traffic thickened and eventually came to a stop. I had been on the road for over four hours and had hoped to beat the traffic around DC but that rarely happens. Arriving at the meeting a few minutes late I was greeted with a hug from Brigitte and with smiles from a lot of familiar faces including that of James “Dragon 6” Rolle, a member of our United States Black Cavalry Family, who had driven all the way from Augusta, Georgia to help with this mission. Members of Brigitte’s team and those of the “Brothers in Arms MC” reached out to shake my hand and then we got down to business. 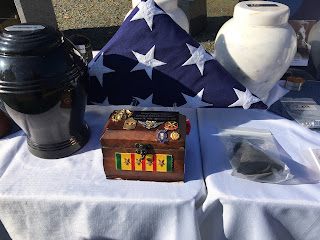 “Some of you may not be aware” were the words that Brigitte used to start the meeting. Then she went on to explain that over the past year she and her team and the executive staff of the Missing In America Project have been working with the National Park Service (NPS) on a very special mission. She further stated that all of the hard work had culminated into a five year renewable agreement between the two organizations that would provide for the inurnment of cremated human remains left at the Vietnam Veterans Memorial, also known as the Vietnam Wall. 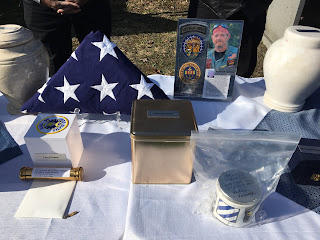 Many of you reading this may not have known that cremains of veterans have been left at “The Vietnam Wall” since 1989. They have been left by family and friends. They have been left in all types of boxes and bags of many different shapes and sizes, concealed in vials and bottles and even attached to bouquets of flowers and letters of love. The National Park Service has collected, categorized, and stored these veteran’s cremains for years. But now with the agreement in place, the Missing in America Project has taken possession of 75 of these cremated remains from the National Park Service and has insured their inurnment with full military honors. 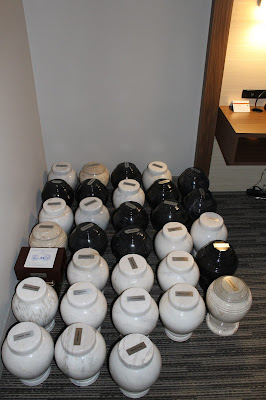 Now knowing the full extent of our mission, we were all ready for Brigitte to assign our individual duties for Saturday. Her team had already accomplished dry runs to the church and determined where the bikes and cars would be parked and where and how the cremains would be displayed. Before she could ask, the Brothers in Arms MC and the USBCF had already worked out the details of what we would do to assist. It was a total teamwork effort in the meeting with everyone focused on one objective, the “precious cargo”. The meeting ended with a decision to all gather in the hotel lobby at 7am to begin transferring the cremains to the vans. Then before breaking up Brigitte took us to the room where the 75 cremains were placed for the night. Seeing so many urns at one time and reading some of the notes that were left with them was a very sobering experience. It quickly brought about the reality of what we were being asked to do. It would be an honorable undertaking. 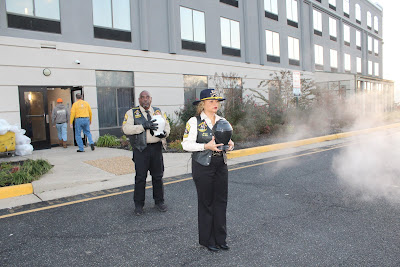 Jan arrived at about 9:30pm. She worked her regular schedule that day then drove down that night alone from Jersey. I briefed her on the meeting and the need for us to be downstairs early the next morning. We were up and dressed on time, loaded our two cars and then went to the breakfast area to introduce Jan to everyone. Some of the Virginia team had already departed for the cemetery. The rest of us poured our coffee then began the delicate assignment of transferring the cremains to the awaiting vans. With all of us working together, it didn’t take long. By 7:15am we were leaving the hotel parking lot 15 minutes ahead of schedule. 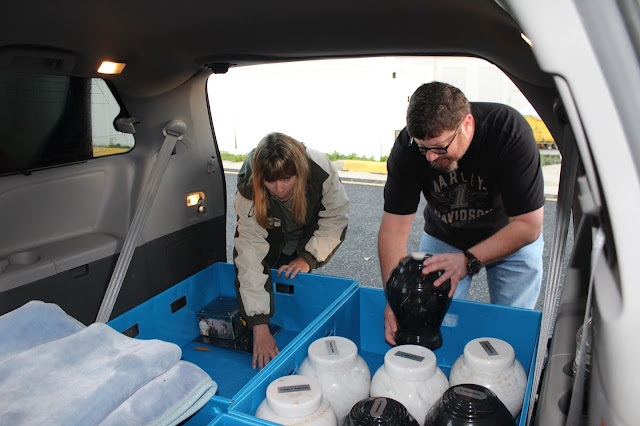 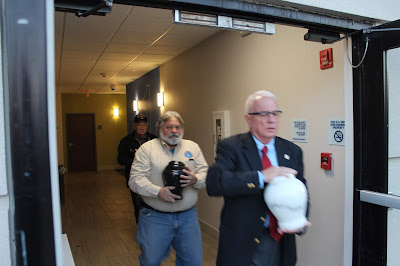 Twelve cars with lights flashing, one behind the other, weaved their way through traffic for 20 miles from the hotel in Stafford, Va. to the country setting of Woodbine Cemetery in Manassas. Grounds personnel were still preparing the ceremony area when we arrived. Hot coffee and donuts sat on the hood of one of the team members’ cars. It was needed as the temperature struggled to get into the 40s. Zurrian Bennett, one of the first to join the USBCF was waiting there with his youngest son to greet us. Moments later word was received that a hand was needed to get the tables and chairs down to the ceremony area. 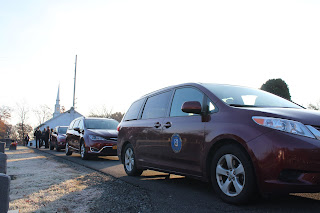 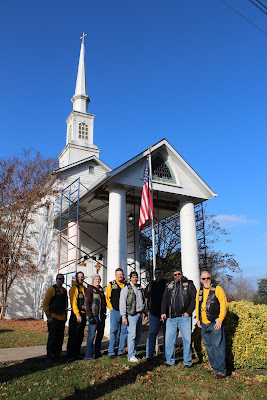 Without hesitation everyone present climbed the church stairs to the storage area and began carrying the required tables and chairs downstairs to an awaiting truck. Then under the direction of Brigitte we lined the tables, covered them with white and blue cloths, and then began offloading the cremains from the vans and carefully placing them on the tables so that each of the 75, regardless of size, would be visible to those in attendance. 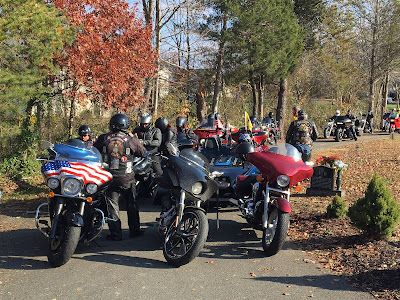 As the roar of the bikes were heard in the distance, Brigitte moved to the parking lot to greet the guest speaker, Ms. Patricia Trap, Acting Superintendent, National Mall and Memorial Parks and other dignitaries. The Brothers-at-Arms MC rotated to their assigned areas to assure the safe parking of bikes and cars and the United States Black Cavalry, now joined by John and Hilda Barfield from our West Virginia Family, positioned ourselves behind each of the four tables. Virginia MIAP member stood by to relieve us if necessary and to guide the attendees to the viewing area. We were all positioned as planned the night before. The hard work of the M.I.A.P. was about to come to fruition. 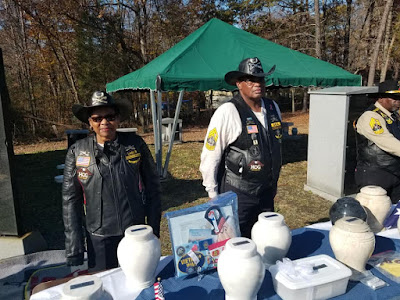 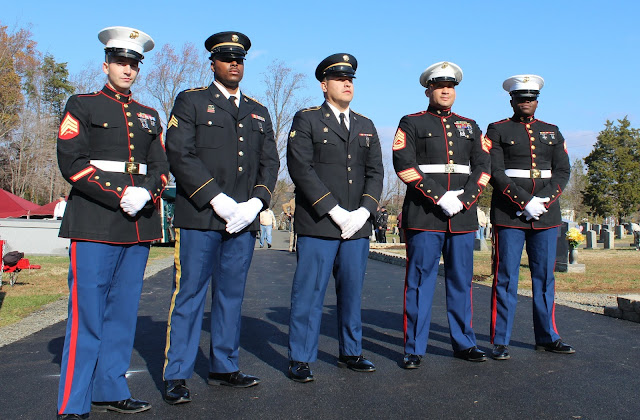 The Army and Marine Honor Guard stood by as attendees formed a line and began viewing the cremains spaced equally upon the four tables. 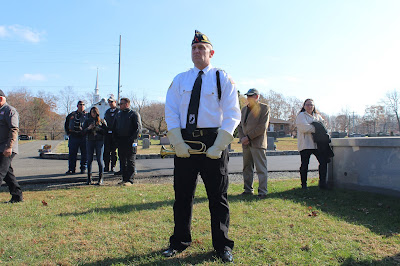 The Bugler waited patiently on a small rise just outside of the tent. Some attendees brought pictures of their departed friends. One in particular had to be consoled by Jan as he carried a picture of his friend at his side and struggled to hold back tears. Nearly all of those passing the tables took the time to simply say “thank you” or to extend a firm handshake. As the line diminished and the seats filled, Brigitte moved toward the mic to start the formal service. 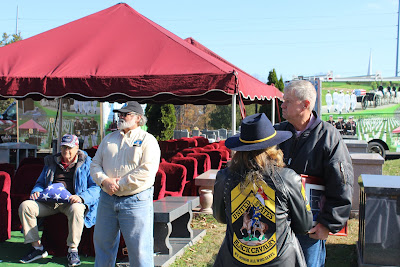 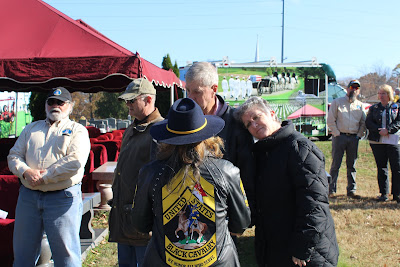 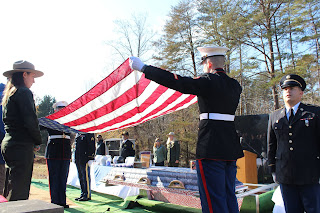 The ceremony was short but dignified. Brigitte welcomed everyone, Don Reid, M.I.A.P. National Chaplain gave the Invocation and remarks were heard from the guest speaker, Ms. Patricia Trap, who personally thanked all who attended and in particular Brigitte and her team and the Missing In America Project for all that they had done and will do in the future. Silence moved over the gathering as the honor guard stepped into place and rendered a final salute by unfolding and then refolding the American flag, once by the Marines and then again by the Army. 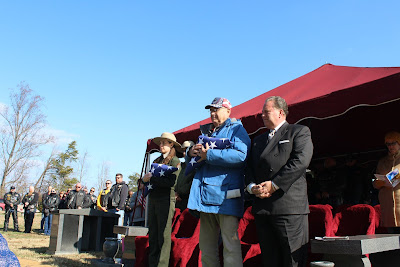 Taps was then sounded by the American Legion member standing on the rise and the flags were then presented, one to the National Park Service and one to the gentleman that was holding tightly to a picture of his friend. No one moved as Larry Brink and John Tutunjian, volunteers with the Virginia MIAP, read the names of the identifiable cremains. A moment of silence was held for the 27 who names were not known. Pastor Gene Wells of Woodbine Church and Cemetery who was there working with us from early that morning gave the Benediction. 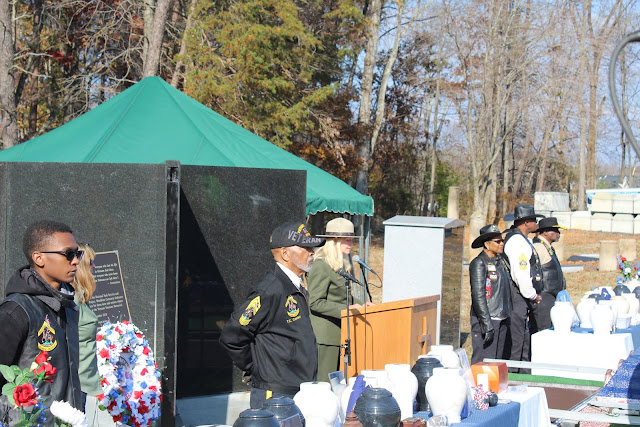 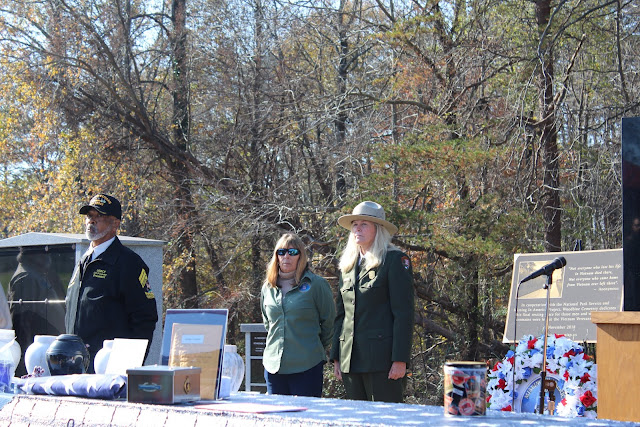 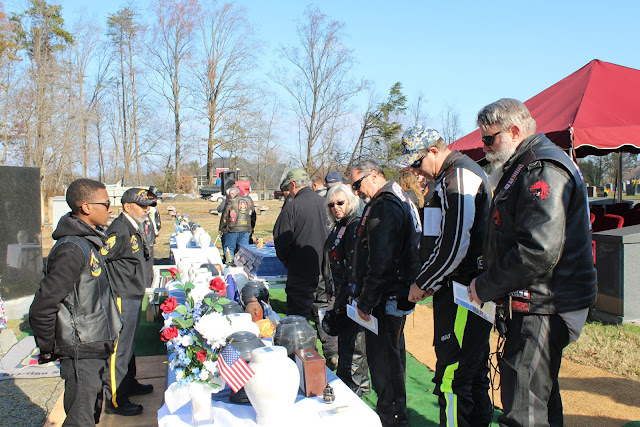 Some of the attendees returned to the tables for more pictures, handshakes and to again say “thank you”. We held our positions until the area cleared and when the fading sounds of the bikes signaled the departure of most, the volunteers gathered at the grave site to conduct our final assignment. The Virginia MIAP Team, The Brother in Arms Motorcycle Club, and the United States Black Cavalry Family all joined together to place the urns, vials, bottles and boxes into the vault. 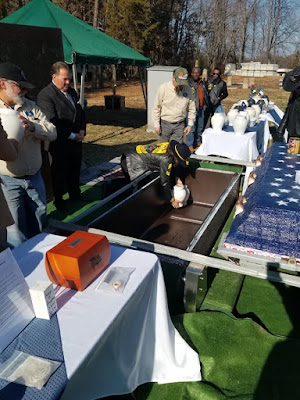 Jan was honored to place the first and we all assisted with the remaining.

Our youngest member, 20 years old Xavier was experiencing his first ceremony. We hoped that there would not be a need for another but we all knew that there will be. It took a while to place the cremains exactly right in the vault so that they would all fit but patience prevailed and when completed we all thanked each other, reached out with hugs and handshakes and stood together as the grounds personnel moved the top of the vault into place.

This mission was completed but others were ongoing at different locations throughout the United States. We could say our goodbyes for now but there would be more to come. So for all of you reading this, you should be thankful that the Missing In America Project is in existence and be willing to assist them when you are able to do so. 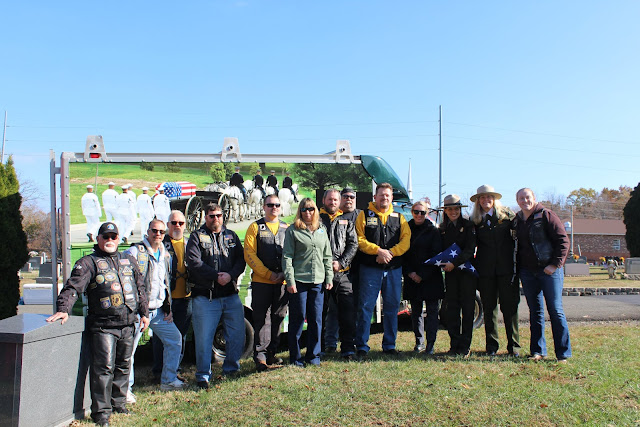 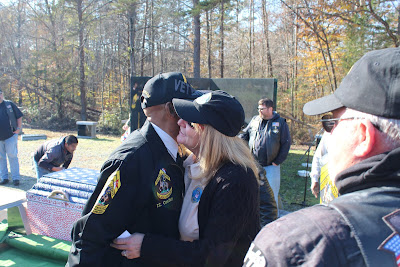 I salute the M.I.A.P. for always staying true to their stated purpose.

The purpose of the Missing in America Project (M.I.A.P.) is to locate, identify and inter the unclaimed cremated remains of American veterans through the joint efforts of private, state and federal organizations. To provide honor and respect to those who have served this country by securing a final resting place for these forgotten heroes.

My heartfelt thanks to all who were involved in this mission, “The 75 from the Vietnam Memorial”.

USBCF
The mission of the United States Black Cavalry Family (USBCF) is to partner with local communities to provide hands on voluntary assistance to organizations supporting the needs of veterans and the welfare of families existing in or near poverty. Additionally, our mission is to educate impoverished families to enhance their emotional, social, and spiritual well being.